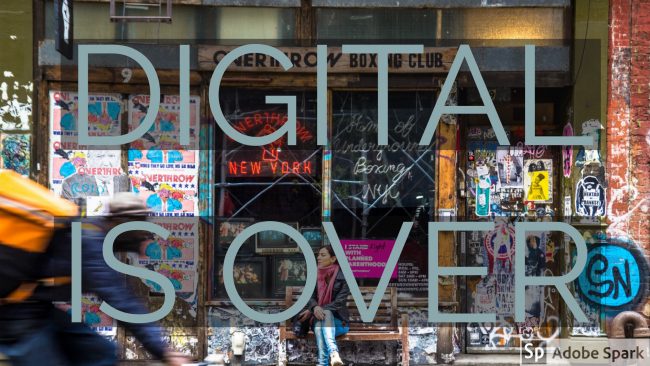 Digital transformation is an anachronism – there is only transformation. The next 2-5 years will be the most violent disruption yet and business is woefully underprepared. Established, trusted and well-funded organizations who position themselves as digitally savvy are talking about digital as a distinct or detached piece of strategy. Like air to humans and water to fish, it’s as critical as your product or service. The ability to survive and thrive rests on business’ ability to move beyond thinking about digital as an abstraction and bring it to bear, full force, in frictionless ways that feel like magic to customers.

In January of 2018 a well-known consulting group who boast an audience of nearly one million on LinkedIn alone published a video clip that summarized findings from their latest report. Apparently the importance of “digitally-related” factors is increasing this year. Fiddling while Rome burns, indeed. This alarming lack of urgency and comprehension will end badly for many and create massive opportunity for those who get a head start or are already significantly ahead. McKinsey & Co. rightly identified this here and only missed with their headline. strategies fail because of mindset.

Nearly 20 years ago the music industry was permanently disrupted and never recovered. The distraction of quarterly earnings and hubris combined to keep the industry occupied while a couple of college kids put together a distribution model that presented the most significant opportunity since Edison first recorded and reproduced sound. The model even delivered free market research about what younger fans wanted! The old guards’ lack of vision and callous disregard for their customers decimated livelihoods, narrowed the scope of artistic output, and turned the industry into a laughing stock. It took silicon valley a couple of years to build the first viable, legal distribution model and that was primarily just a way to monetize a piece of hardware. Today fewer artists are discovered and developed however, the customer is the big winner.

As I was thinking about a way to wrap up, Brian Chesky at Airbnb came out with the idea of an infinite company. Bold voices like this will move the conversation.